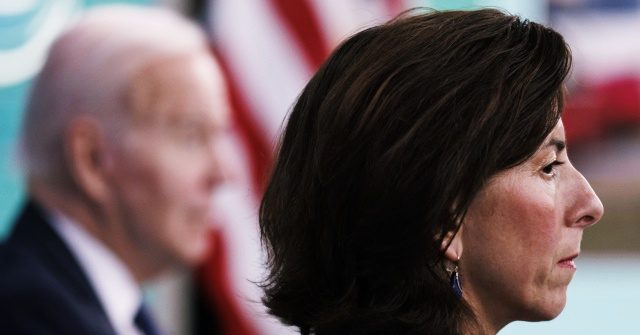 The globalist wing of President Joe Biden’s White House is reportedly suggesting that the administration cut United States tariffs on China solely to score political messaging points with voters, regardless of whether a move would reduce inflation.

For months, Biden has been considering cutting U.S. tariffs on billions of dollars worth of China-made products that were first imposed by former President Trump and have been applauded by American union workers and domestic manufacturers.

According to Politico, discussions inside the Biden White House are “ratcheting up” as the administration grapples with soaring inflation, even though research has extensively shown there is no correlation between U.S. tariffs on China and current inflation.

Still, the globalist wing of the Biden White House, represented by Treasury Secretary Janet Yellen and Commerce Secretary Gina Raimondo, is continuing to push the president to cut U.S. tariffs on China. Raimondo, Politico reports, has even gone as far as to suggest that China tariffs get cut solely to score political messaging points.

Commerce Secretary Gina Raimondo, meanwhile, has focused her arguments on messaging — that its good politics to cut tariffs even if the actual impact on inflation is not that large. [Emphasis added]

Yellen, meanwhile, has continued citing a study that claims cutting U.S. tariffs on China could save nearly every American household about $800 every year. The study, though, was blasted by U.S. Trade Representative (USTR) Katherine Tai — a fixture of the economic nationalist wing of the Biden administration.

“The issue is that if you look at their methodology, and you look at how they think that, you know, inflation can be addressed through using trade tools, they are assuming a world, and U.S. economy, that has zero tariffs,” Tai said of the study that Yellen keeps citing as evidence to cut U.S. tariffs on China.

“So here’s the thing: For as long as we have been regulating commerce, we’ve had tariffs in some form, right? Every country still has tariffs,” Tai continued. “We haven’t always had inflation. And so I really have to challenge the premise of that study. And I think it’s either something between fiction or an interesting academic exercise.”

In the New York Times, Kim Glas with the National Council of Textile Organizations noted that there has been no evidence that tariffs have raised prices on American consumers, as is often claimed by free trade advocates and economic globalists.

Last week, the United Steelworkers (USW) wrote to Biden, pleading with him not to cut U.S. tariffs on China:

Too many U.S. companies have failed to take needed actions to address the threat posed by Chinese Communist Party policies. Many continue to outsource production, and research and development, undermining U.S. competitiveness and national security interests. They have failed to respond to the signals clearly and continuously sent by the CCP that it is not interested in competing, but in winning and dominating key industries. Our government must act in the national interest to strengthen our economy for the future. [Emphasis added]