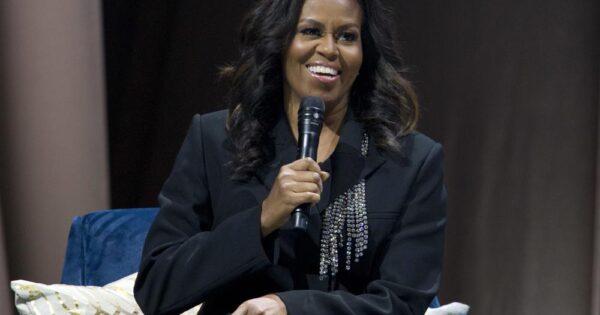 Michelle Obama will be touring six cities this fall to promote her book. “The Light We Carry: Overcoming in Uncertain Times,”Washington, starting in mid-November. D.C., and Los Angeles a month later.

“I’m looking forward to making some new connections — and of course, seeing some familiar faces from the last tour,”The former first lady made the statement in joint statements Wednesday through Crown and Live Nation, her publisher.

“This book means so much to me — it’s a collection of perspectives and practices I’ve used to keep me afloat amid uncertainty. On this tour, I’ll be sharing some personal stories and lessons that have helped me along my path, and I can’t wait to tell you more.”

Obama will officially open the Warner Theatre in Washington, on the 15th anniversary of the book’s publication. She will then travel to Philadelphia’s The Met, Atlanta’s Fox Theatre, the Chicago Theatre and San Francisco’s Masonic, before closing at the YouTube Theater in Los Angeles.

These venues can seat approximately 2,000 to 6,500 people. The settings are far bigger than for most book events, but smaller than Obama’s stops on the first leg of her tour for the 2018 memoir “Becoming,”She was seen at Chicago’s United Center and other venues housing 15,000+.

“Becoming”Nearly a million sales, it went on to be the best-selling book ever by an ex-White House resident.

Like with “Becoming,”Obama will give a speech in each city, with moderators from other cities to be revealed later. Oprah Winfrey and Tracee Ellis Ross joined Sarah Jessica Parker. “Becoming.”Obama, in partnership with Live Nation will reserve tickets for select community members at every venue.