McCarthy: I Imagine ‘That We’re in a Recession’ 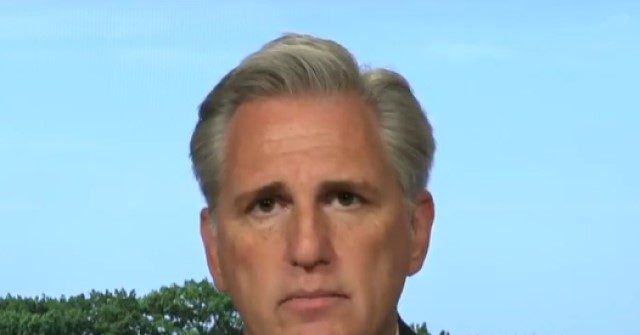 Throughout an interview aired on Thursday’s broadcast of the Fox Enterprise Community’s “Kudlow,” Home Minority Chief Rep. Kevin McCarthy (R-CA) acknowledged that he believed “we’re in a recession.”

McCarthy mentioned, “I actually believe personally that we’re in a recession. Remember, the definition is two consecutive quarters where you went down. Salaries cannot keep up with this inflation. We’ve watched it continue to grow. We watched with just the numbers [that] came back last week. What can we do if we change the course? Well, if you join with us and we have a new majority in this House, the first thing we’ll tackle is make america energy independent again. That lowers the price of gasoline. It also lowers the price of everything you do. Because of the shipment of it and others. It keeps more money within your pocket.”

“The other thing we’ll tackle is sound fiscal policy,” he continued. “We’ve watched this runaway spending by the Democrats, spending that other $2 trillion. And it wasn’t just you and I warning the Biden administration, even Larry Summers said if you do this you’ll get inflation. … And you will no longer have the fear of this Build Back Better, of raising of taxes.”